Look What We Did!


Of course those ribbons don't tell the full story. Due to a scratch and an elimination my Training 1 opportunity class had only 1 other person in it. Training 2 opportunity was larger and had more experienced and even professional riders but with lots of baby horses and lots of "baby's first show" scenarios. I'm still proud though because I got great scores and was a nonprofessional that got my very difficult pony through her 3rd show in one piece!

However, my main goal was to have a rideable pony, outside, with the judges' "booth" at the end and I had that in both tests!

First I rode Training 1 for, what I later learned was, the "friendly" judge. The ring was off in a farm field and was quiet. There weren't many distractions and the judges were in a truck at one end instead of a horse trailer which I knew would go better. I felt really ready for this test and very confident even though, while Katai had loaded pretty well that morning, she was a fire breathing dragon pony when we got to the show grounds. She quieted down once we started warming up and I did LOTS of bending. We ended up being able to go a bit early and we took it. I had a really great ride with just a couple of bobbles and scored a 62.826%. 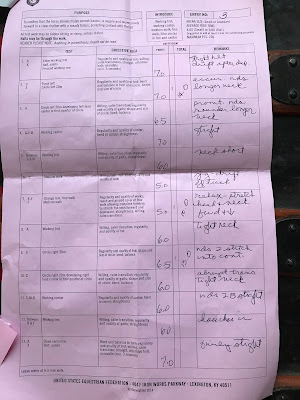 I was SOOO happy and it was so unexpected, especially the blue ribbon which just made it that much sweeter. After the first test I found out that the judge I had for the next test was the "unfriendly" judge and heard some horror stories. Sounds like she'd had some pointed remarks about some of the other riders and my friend H who was there to watch my first test warned me not to feel bad or lose hope if I didn't score well for the second test.

My first test was just after 10am and my second wasn't until just after 4pm so not only did I have a long day to wait but Katai's buddy left part way through so she was by herself. It was also SOOOOO hot and was forecast to get up to 89*! They waived jackets (probably MN is the only place where they waive coats at 76* ;) I know for many of you that wouldn't be that hot but last week we were still getting highs in the 60s so this was just such a huge swing for everyone to deal with. I don't handle heat well on the best of occasions and with some stress and the first hot day of the year I was really worried. I thought multiple times about just scratching my second test but I really wanted to get Katai some more show miles and this next arena was MUCH busier (right in the middle of everything) and had the trailer of DOOM so I wanted to try it out.

I am SOO glad I stuck it out! Besides a 4 on our halt (which wasn't even close to the center line and barely happened) we did SOOO well! The judge also had more great comments for us and we got another 1st with a score of 65.769%!! 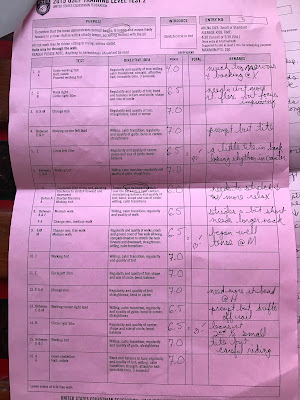 I also can't believe that Katai got 6.5 on gaits in both and she was tight enough that they weren't even seeing her true gaits :) Plus I'm really happy with the improvement in her walk scores since that's the roughest part of the test for us right now. So happy!! I really can't believe that we did this well at my first rated show. I clearly understand that the firsts in both tests had more to do with the small classes than anything else but those scores make me SOOO happy! Of course the satin and glassware is pretty darn amazing too.

Another friend let me know that she got a few pictures so once I get those I'll share. I'm still waiting on the pictures from the last show but will share those as well and hopefully soon!
at June 03, 2017