After checking on Katai yesterday Lisa invited me out to ride in the new arena. She's asked me to stop and ride with her even once I'm fully moved out and I happily accepted. It will be good for me to ride a fully trained horse and fun to still spend some time hanging out with Lisa.

Last night I started out riding Missy who is a small, at least for an OTTB, Bay mare who is in her late teens. She hasn't been ridden much and is stiff but after 15 minutes of warm up and some very concentrated leg yielding and proper circles she was moving extremely nice. It was really fun to really RIDE again and to feel the difference in Missy after some correct riding.

While I was riding Missy I noticed that Lisa was having some trouble with Liv, who is an awesome 2nd level Dressage horse, and I asked if she would want to switch. She did so then I climbed on Liv and worked on getting her to slow down and not blow through the aids. She had cantered the day before and was hot and could only focus on cantering. It took about 10 minutes to get her to actually listen and stretch out softly into contact rather than lifting above it and running through all aids.

Overall it was an awesome ride even if I'm extremely sore and I really look forward to doing it again :-) 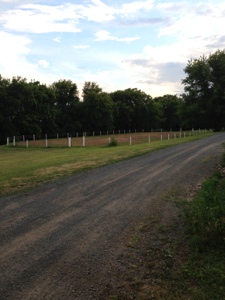 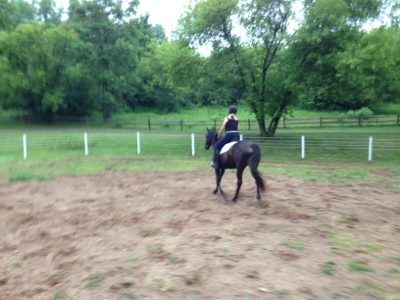 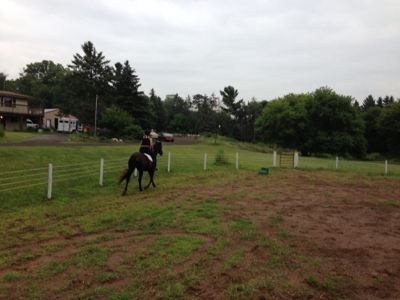 Pony is at Home

Yesterday I went to work with Katai for the first time since I moved her to the new barn. I knew she would be adjusting still but it is still always hard to see them backslide and she had been so good at home that it was tough.

I kept things simple and made it impossible for her not to do well. I made her stand tied in the new barn but left the top of the door open so she could see her new friend, who's name is actually spelled Sevy, oops! I also lunged and then tied her in the barn again and fed her her grain.

She was jumpy, bouncy and naughty the whole time. The thing I really was worried about was how long it would take her to return to normal and I got my answer tonight.

I went out again tonight and planned on tacking up and longeing for a little longer and otherwise keeping it just as simple and positive as yesterday.

I could tell as soon as I caught her that she was much calmer and more relaxed and she proved to be almost back to normal. She stood calmly in the barn and was mostly well behaved when I tacked up.

I pushed her more when I was lunging and made her walk, trot and canter nicely but just for a short time. Then we walked back and she got groomed and had her grain.

I was so happy that she returned to her normal behavior so quickly! I think the plan for tomorrow, if the boy is sick like he thinks he will be and I can't go see him, is to go out and work on her hooves.

Hopefully I can start riding again this weekend but starting Thursday I'll be moving into my new apartment and working full days at work so I don't know how much time I'll have. 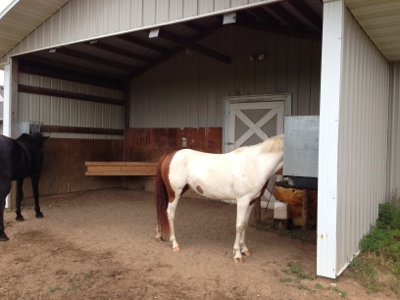 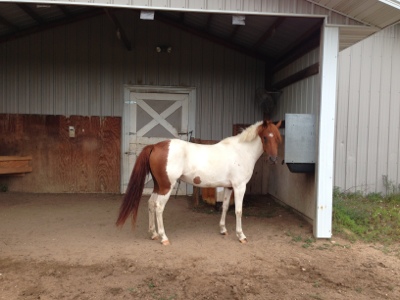 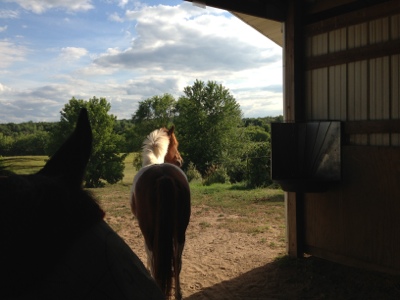 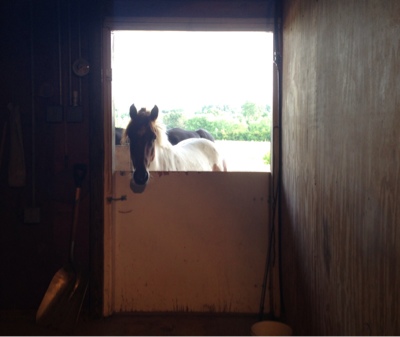 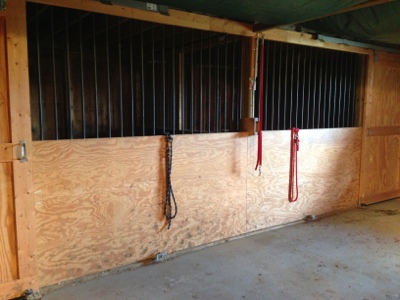 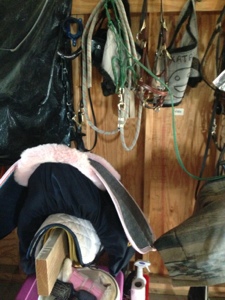 The message came on Thursday from Dan, the name of the person who is now boarding Katai, that the pastures were all cut and he was ready for me to move her. This morning worked for both of us so I got up early, hooked up the truck and loaded the pony. Despite being in raging heat from the neighbor's gelding she was really very well behaved.

The drive went well and was about half an hour which is perfect to continue to slowly get Katai more used to riding in the trailer. I was nervous but I didn't kill anybody and drove safely even though its only my second time, for more than five minutes, driving with the trailer. She unloaded well too even though she was very ready to be off and was a lady while we waited for Dan.

Dan was impressed with her behavior which was nice because that's been a goal for me. She really did well with meeting his gelding as well who is named Sav, which is short for something but I'm not exactly sure what :)

We let them meet on lunge lines and there was no squealing or striking. They were good and calm so we let them go and they trotted around the pasture.

Sav has been on his own for awhile and was obviously happy to be meeting a new herd member. I'm happy that it looks like they are going to get along and the pasture is truly amazing. I will take more pictures once I'm there on my own. The horse area of the barn is small but very neat and clean and the access to the stall will be perfect.

My goal now is to work with her and get her riding well and behaving even better and them I will reassess, see where I am financially and possibly move her to a barn with more riding options and an arena. For now though I really love her new home :) 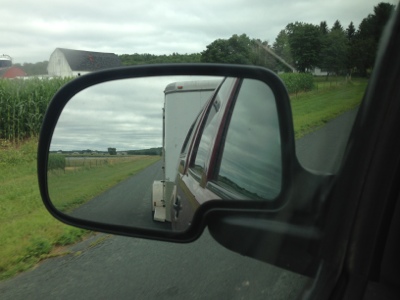 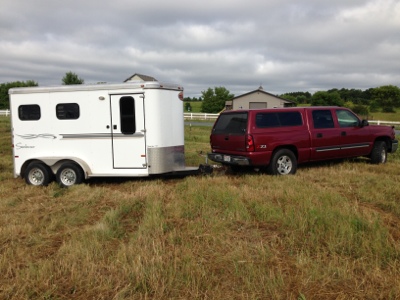 A Graduation of Sorts

Tonight I am so extremely proud of my little girl!

Lisa asked if I wanted to bring the girls, Katai and her horse Liv, to the neighbor's arena that we finished last weekend. I have a cold but I knew it would be good for me to get up and do something rather than moping around so I agreed. I had no idea how it would go but it ended up being an awesome experience!

I trailered Katai down to the neighbors which was the first big step. I've only ever trailered her to bring her home and that time she freaked out and it took me over an hour to load her. She was understandably a little freaked out when I unloaded but she stood tied while I groomed and tacked up even if she was moving her feet a little more than she should have.

Lisa had elected to ride to the neighbors rather than trailer and the only time that Katai really freaked out was when she could hear Liv through the trees and they started screaming at each other. She pulled back twice but thanks to her awesome rope halter she didn't get free and calmed right back down.

I took her out to lunge her a bit and get her feet moving while I waited for Lisa to arrive and them tied her back up to the trailer while Lisa changed and adjusted tack.

When we initially brought them both I to the arena I figured it would just be a lunging day because she was still pretty worked up but as I actively lunged her at a walk, using the whole arena, she settled right back down and was being so calm and well behaved that riding just made sense.

So I climbed on. She was extremely good and having another horse to follow helped with forward movement. She threw her head up one time with naughty intentions but I just growled at her and she went right back to her normal, well behaved self.

After that it was all easy. I ended on a good note sooner than I would have liked but the day had already been full of new, stressful things for her and I didn't see the need to push it especially when she was behaving so well.

She again stood tied to the trailer like a champ and walked right past the neighbor's dump truck into his pasture without batting an eye. She and Liv will stay down there for the rest of the week so we can take advantage of the nice weather and the arena but I'm guessing that the new stable will be ready by this weekend so then I'll probably be moving.

I am so totally proud of my pony and myself for getting her to this point! Now I just have to work with her more consistently and she will be the most awesome, stubborn pony ever!!!

It wasn't that long ago that I started my new job and I talked about the change in my life then along with the option of boarding. Then about a month and a half ago I started dating a really incredible guy that I LOVE spending time with.

Now I'm moving myself and Katai!

I've wanted to be in the twin cities for the past few years but I have to be where the job is especially with our slowly recovering economy and I really enjoy my current job but after dealing with interesting (cheap) rentals for the past few years its time for me to finally have my own (well sort of since its a rental) place :-)

I am moving almost exactly half way between where the boyfriend/friends live and where I work. Of course this also means moving Katai. I found a great place near where I am going to be living that will also be affordable. It's a small private stable with one horse and two stalls. The other horse is getting a little older and his owner was looking for a companion for him that wouldn't pick on him. The barn is insanely neat and clean and the stall is large. It has great pastures and he has it all set up for proper rotation :-)

The worst downfall is the lack of an arena of any kind. I just spent the past couple of weekends building an incredible arena at the neighbors and I was really looking forward to being able to finally have a real arena. I also won't have access to a horse trailer which isn't fun.

I'm hoping that in the next year, or so, I'll be able to move her to one of the other boarding barns that are nearby which have multiple arenas and more people to ride and hang out with. First though, I have to make sure I can afford things :-) I will post pictures of the barn as soon as we're moved in.
at July 22, 2013 No comments:

This post also could have been called "eaten by mosquitoes" but I thought I should maybe keep it positive.

Long story short, I haven't had a real arena to ride in for several years except for a short time with Sora while I was boarding her, of course I couldn't ride her then but that's not really the point is it?


At any rate I now have an opportunity to finally have an awesome, large arena at the neighbor's!!! He is in a relationship with Lisa, my landlord, and said that if we bought the fencing materials he would buy the sand. He already had an arena at some point and the base is still there but he stole the sand off it to use it for his landscaping business.

Last weekend we put in posts and got most of them painted white. This weekend we have to finish painting and drill holes for the rope. Then we just need to hang gates and get the sand and we will be set! 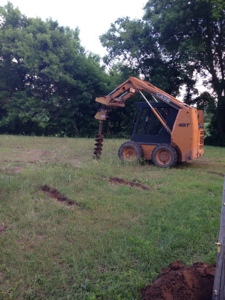 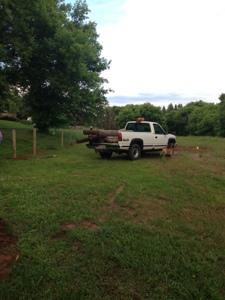 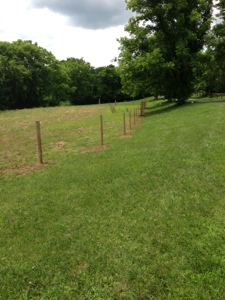