Anyone who knows any member of my family knows that we are all obsessive :-) It makes family gatherings interesting, to say the least, but it has made us all successful in our chosen fields. When we go for something we throw ourselves fully into it and don't look back. When by brother chose to join the Marines a few years ago he started working out, on his own with no trainer, and kept it up for two full years before he was actually enlisted. My sisters routinely practice, they are both successful violinists, up to seven hours a day on their own and my mom decided a year ago that she wanted to run in a marathon and has signed up and ready for one early this next year.

I have always felt that it is important for the rider to be as much of an athlete as we expect the horse to be and have always been fairly fit. When riding larger horses I felt as though I was strong and fit enough, now I realize that I wasn't, but when I changed to riding smaller equines I started to feel differently. Since I bought Myshla in April I have lost over thirty pounds and in October I added a gym membership. This is the first time I have EVER worked out at a gym. In the past I have walked, run, done sit ups, some stretching and even lifted some weights but never in any real sort of routine. However, when I decided that my goal with Katai was to earn my bronze medal I knew that I would have to do something more.

The first few times that I went to the gym were incredibly intimidating. I had two sessions with a personal trainer to teach my how to use the equipment so that I wouldn't do anything wrong and then started working out on my own. It is amazing the difference that a month and a half of routinely working out will make! I've only lost a pound or two, partially because my diet suffered when I initially started working out, but I've lost several inches and for the first time I can actually truly claim to have at least some core strength. I went from barely being able to do 20 crunches on the ground to being able to do over 50 on the inversion table thing :-) I have a long way to go to be really fit but I'm on my way.

For anyone that is curious about an adult riding a pony there are several things that I personally keep in mind. It is widely known that riders should weigh no more than 20%-25% of a horse's body weight. Some people say that ponies can go up to 30% but in my mind that is too much especially if you are asking them to be very athletic. Currently I am right around 20% of Katai's weight but when I loose the rest of the weight to meet my goal I will be closer to 18%.  I would also be curious to know the ratio of some cowboys on reining horses. To me they seem much more unbalanced size wise than me on my ponies but it is hard to know. Secondly there is the amount of bone and build of the pony. Some ponies are built more like small horses and are very dainty, others are built more like small drafts. Both Katai and Myshla are more like the second although of the two Myshla is built much heavier. Finally there is the balance of the rider. The smaller the horse the more you can through off their balance with your upper body. I can feel this when I ride Myshla especially when she wasn't in as good of shape as she is now. This just means that you have to be much more aware of your balance and how you use your upper body.

I truly adore riding my little girls and want them to have the best health, comfort and happiness that they can. I am always aware of how they are doing both health wise and emotionally and pay careful attention to their needs. I know that riding ponies isn't for everyone but I truly enjoy them so much more than bigger equines that I am happy to pay for a gym membership to keep my ponies :-)
at December 02, 2012 No comments:

I'm back after a short break that was mainly because of the weather and Thanksgiving. I work in retail so the entire week was spent getting ready for Black Friday and I had to be up at the awful hour of 3:30 to get ready for work that morning :( After I spent Saturday recovering I did some work with Katai on Sunday and during the rest of the week but I just haven't seemed to find the time to write about it.

Today though we made real progress! When I last sat on Katai I was able to find some major issues that I feel were caused by her being spoiled. She froze entirely when I got on, which alone would have been normal, and than turned stubborn and angry. She would move her hindquarters around but was completely  unwilling to go forward and I had the feeling that if I kept pushing she was going to go up instead.

Unfortunately it meant that I had to fix it which meant going back to work on more ground work. The good part is that she showed me that issue at that point, early on, rather than out in the middle of a trail ride or at a show or other completely inconvenient place. To fix it I worked on reinforcing a huge FORWARD at just a signal or click of my tongue and than refined it to be able to cue her for the exact speed I was looking for.

Today was finally the day to put it to the test. I knew that she wouldn't immediately be cured and would revert back to her initial behavior once I was on her but the point of the ground work was to create the beginning of a language, or way of communicating with her so as to remove any confusion. The weather was also helping me out since it was in the 40s rather than the teens like it has been. To start with I reminded her of our ground work lessons and once I felt that she was really listening to me I laid over her back with the saddle on and clicked. She got just as tense as she did last time but this time she actually thought about forward. I then used the end of the leadrope and tossed it against her hips until I got a step. I relaxed, rubbed her all over and repeated. After a little while, still just laying over her back since she has had the tendency to think up or buck, she was starting to relax and realize that this was a lesson just like any other. She also seems to think that I'm going to blow up and freak out when she doesn't do something right and when I remain calm and just repeat she eventually calms down as well.

Eventually she was relaxed enough that I swung up and sat properly on her. She really relaxed then since my weight was more balanced over her and was dropping her head, chewing, soft and actually offering forward steps on her own. I worked on getting just a couple of relaxed steps in a row and actually had some steering and then called it quits.

I did have Lisa there just in case and she got a couple of pictures of us. This is where the not a DQ part comes in lol! I am really normally not this much of a mess but I was cold!! I know I also wasn't wearing a helmet and please don't beat me up about it. This is literally the first time in over three years that I have even sat on a horse without one and I realize it wasn't the time to start but I really wasn't thinking I was going to do more than lean over her and it was one of the moments that everything was just perfect and I felt safe.

It won't happen again and I assure you that if you ever see me without again in this blog you are all welcome to scold.

On to the messy and awkward pictures, I always seem to be doing something strange with my face when people take my photo :/ I can't wait to see her in actually dressage tack and I actually have a really nice bridle that I'm saving until we start to be able to add the bit to the mix :) 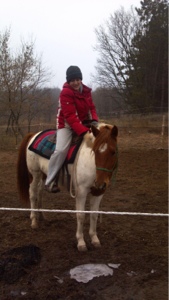