Not that I don't always have a fun time on the weekend but today was sort of a nice, horse filled, day of doing just the things I wanted to do since my bf was doing the thing he loves (cars) all day.

First off, I got Moshy mainly so that I could have a dog that could go do things with me. I adore Veggie but he just wasn't socialized well enough so while I can do the things I need to do with him it certainly isn't fun or always safe to bring him places and the barn tops the list of places he shouldn't go. With Moshy I not only chose a breed that I knew could be a fairly decent barn dog but I've also worked with her a ton to socialize her to all the things she'll see at a barn. The toughest has been horses since I got her during a really long cold winter and she was just too tiny to spend much time at the barn. 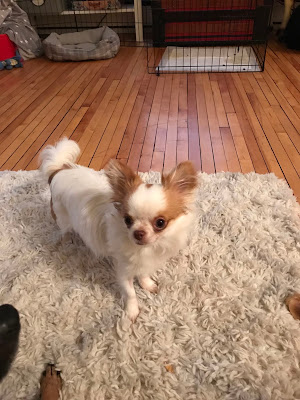 While she's really well socialized I've been a bit nervous to bring her back to the barn since if she wasn't good with the horses it would be tough to manage her there without just bringing her back home and with the drive out 50+ minutes it wouldn't be nice to have to just turn around and bring her home.

Then yesterday I got an invite from H to go watch her ride at a really nice local show that was close to my house. Right away I thought of bringing Moshy with me but I knew it wasn't the best idea to test how well she'd do around horses there for the first time in a few months so I decided to start at my barn. I knew it would be quiet since most Sunday mornings there are a lot of people at church or sleeping in and I went for it.

Long story short, it went really well! I walked her a bit around the parking area and then carried her over towards the fence of a pasture with two quiet horses in it. I didn't get too close and she barked a couple times but they weren't spooked and when I gently scolded her she gave it up and just watched, interested to see what they would do. I eventually worked my way up to the fence and she was still calm and quiet. After that she never barked again! I walked her all over, introduced her to the old mostly blind barn dog, held her near the cross ties while a friend was grooming their horse and carried her while I walked Katai back to the pasture after my ride. 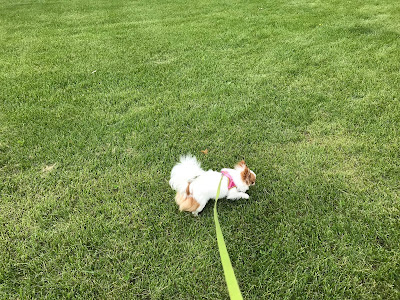 During my ride she hung out in her carrier in my car with all the windows open (it was in the low 70s and overcast so she stayed nice and cool) and I'm pretty sure she just slept. If I do this often I may get a plastic crate to keep in the back of my car just so that she has a nice secure place to stay while I ride if needed. If it's warm, I could put her in the air conditioned lounge instead. She was just so, so good and it felt so validating after all the work I've done.

My ride was pretty decent as well. Katai had her mare panties in a bundle and didn't want to pony appropriately but she let me help her loosen up and then we got some decent work and some of the best shallow serpentines at the canter that we've done where she really sat back and carried vs. just running. More on how we got there in a different post though! 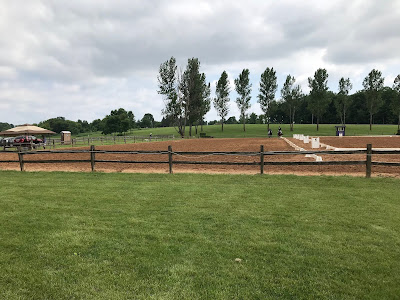 After Katai was put away I stuck around and let Moshy run around a bit more and talked to friends. I didn't want to go home for an hour or two and then leave for the show but I also didn't want to get there too early. Eventually we left for the 1+ hour drive to the show grounds. I stopped for lunch, gas, and coffee along the way and Moshy mostly napped or watched me drive.

Once we got to the show grounds I crossed my fingers that she would remember and not bark and she came through! I carried her at first and we found the barn with H in it. She thought Moshy was adorable, as did many other people who stopped me to meet her, and gave her some pets while she was getting ready. We got there about an hour early so we had a chance to chat and for Moshy to meet a few dogs which she was a total lady about. 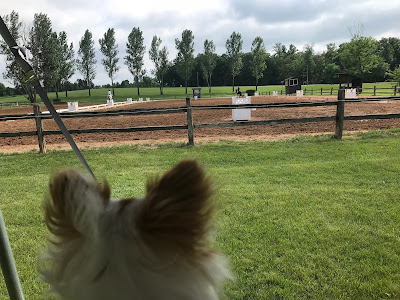 Eventually H was ready and we headed out to the arena to watch. Moshy made more friends and then sat quietly on my lap in the bleachers watching H put down a really good test that she ended up winning a blue for. After that we chatted a bit more and then I headed home with a nice sleepy puppy who immediately got a bath since her mop self had picked up most of the nasty things on the barn floor at that point.

I had so much fun and it was so nice to have a well behaved companion that I didn't need to worry about come with me and do all the things. I'm planning to make bringing her to the barn a regular thing!

When I decided to move to this barn, which meant no more weekly lessons, I certainly never intended to stop taking advantage of learning opportunities. It was just that I didn't want to continue to do lessons each week every week. That was coming both from a budget perspective and because after all these years of weekly lessons (mostly not riding) I'm just tired of having a weekly commitment every week. On top of that, I learned so much from Jane and then with the winter we had we took a big step back so much of what I'm working on right now is getting her back to where we were.

Of course I booked a couple lessons with S2 right away when I moved and when we decided at the second lesson that I wouldn't be going to the show at the end of May I moved my show budget to lessons and booked three more right away instead. That makes for 5 lessons with S2 in May and 4 of those were within a week. During one of those lessons she told me that Kristi Wysocki was going to be at the barn teaching a clinic and that she'd encourage me to ride with her.

I'd taken a fair amount of time off work so I wasn't sure if I'd be able to get the time off I needed for the clinic but in the end I was able to leave a bit early and do a late ride and while it was a little tight it all ended up working out. I truly wish I had clinic media but unfortunately there wasn't anyone there taking pictures and in the rush to change into barn clothes I left my phone in my car and just didn't think to see if someone could get any media.

I had been warned that Kristi could be blunt but I do really well with blunt. I like people who tell it like it is even if it's brutal. It's just the way I learn best. However, I never even saw that side of Kristi because she liked both of us and actually had very little feedback about the things we got to during that lesson. Part of that was because Katai was busy being the spookiest pony she's been in a REALLY long time with the sound system on in the arena so Kristi spent too much time helping me work through the spooks and even feeding Katai sugar :)

However, we still did get a lot of riding done including lots of trot, leg yields, canter-trot transitions, half halts work, a bit of work on my position and posting, and on generally slowing down the walk and trot after the canter. I got complements on our leg yields (totally Jane's doing) as well as my geometry which was AWESOME to hear coming from a judge especially since it's going to take good geometry to score really well on an average moving pony.

In all honesty she had very little to say. She wanted me to keep my elbows closer to my sides (yeah I flap when I'm concentrating on things haha), and to pause more at the top of my posting. I also got a couple reminders to look up. When we went to canter it fell a bit more off the rails (other than the spooking which was already solidly off the rails) because once Katai is asked to canter she thinks only canter is a thing. She helped me just slowly work through it but there wasn't anything groundbreaking. Just good solid, patient, riding.

In the end I'm really glad I rode with her and I got some really good feedback but I continue to go back to how incredible Jane is and she charges less than a 7th of that lesson for an hour vs. 45 minutes.

At this point I'm going to take a longer break from lessons. If anything, the lack of anything really ground breaking from that lesson (which again was at least partially caused by Katai's spookiness) really makes me want to continue to push through the things I know we need to work on more before I pay for more lessons. Between the things I learned from Kristi and the things I learned from S2 I have some additional items to work on as well as all of the work that Jane instilled in me so I'm really confident that we can get a ways now ourselves and then hopefully get S2 involved again as we get a bit closer to my next potential show!
at June 01, 2018 2 comments: