With my new promotion things change a little as far as me being able to attain my goal of getting my bronze medal, or at least most of my scores, on Katai. Basically it allows me to fast track a bit.

Something I haven't even been able to dream about.

Because of that its time to change up my pony family a little. Myshla deserves tons of attention and I know I won't be able to give her the time and attention that she deserves. Because of this I am seriously considering rehoming her. I have neighbors on each side that have been wanting her since I got her and the person who we get our hay from would love to take her as well. All three would be excellent homes with wonderfully behaved small children.

The other thing that makes rehoming Myshla a good option is that I'm going to start boarding Katai. I will now be able to afford it and with a better arena, indoor and more chances to take lessons it's exactly what we both need to help my goal become a reality. There are two facilities that I'm trying to choose between and barring availability I have a tough decision to figure out where she should go.

I will say that whether I keep Myshla or find her a new home it will be done only with her best interest in mind and if she does go to a neighbor I'll see her on almost a daily basis :)
at February 26, 2013 No comments:

I started this blog with the idea that it would mainly be about my ponies but an important thing happened yesterday and that is that I got the job offer I was working towards! I've done a few interviews over the past month and did plenty of worrying but today I officially got the job offer.

This changes a few things with my plans for my girls which I will go into further in a future post. For now I'm just going to bask in the joy and excitement of a hard won promotion :)
at February 25, 2013 No comments:

I didn't realize until I really started working with Katai just how impossible Sora was to train. I was starting to feel like a completely incompetent horse trainer and I'm not. I'm hardly an expert but I did train three ponies that all went on to young kids and two horses, one of which ended up with a couple of beginning trail riders. I've also retrained horses and brought them to higher levels.

I would never suggest that I know everything, or even most things, about horse training but I would say I'm pretty competent at getting them started well and safe with no bad manners and with the skills to go onto a performance career if desired but Sora was starting to make me think otherwise.

I don't know if there was actually something wrong with her mentally or if it was her background but now that I have another horse to compare her to I'm beginning to realize that there was definitely something wrong. She simply couldn't retain things and couldn't generalize at all. I could teach her something simple in one place, after tons of repetitions, but take her someplace else even if it were familiar and she felt safe and she would completely loose the lesson that she previously had down. It was insanely frustrating and I was blaming it all on myself.

Yesterday, in about half an hour, Katai learned more about ground driving and quicker than Sora ever did because she had retained and can generalize information. I had taught her all the necessary steps and she put them together just the way she should, with some help from me of course :) It certainly wasn't elegant but she worked with me, tried her hardest, thought about what I was asking and learned from the experience which is all I could ask.

There is a dressage trainer, that I would really like to take lessons with, who has just about given up on me because of Sora. She teaches at the place that I was boarding at and tried to give me advice, which I happily took and tried so hard to accomplish but never could. She showed me a bunch of desensitizing techniques that I did a TON of with Sora and while she would eventually calm down about that stimulus in one environment as soon as I would change it even a little I would be back to square one. She would see Sora freak out and I'm sure she thought that I wasn't even attempting to try her suggestions.

The whole thing was sickening to me especially since I've been a student since I was 5 years old. I've taken weekly lessons for music, and sometimes bi-weekly lessons, for the past 20ish years. If there is anything I DO know its how to take what a teacher is saying and put it into practice and this was making her think I didn't want to or couldn't.

This trainer knows that I have Katai and knows that she is untrained. I'm sure she is thinking this will be a train wreck especially since she didn't see what wonderful citizens the other horses I trained where once I was done with them.

I'm competitive and stubborn. Katai and I are going to wow her and change her mind if its the last thing I do

I knew when I acquired Katai that I would need to buy another saddle because her back is shaped so differently that Myshla's. I did hope that Myshla's Niedersuss would fit her well enough to use for the first couple of months but alas it wasn't to be so and so I've been using a western saddle when I've been working with her recently. Over this winter with fewer hours and smaller payroll bonuses a saddle wasn't in the budget but I just received my profit sharing bonus so I finally had a good saddle budget :)

I started out with the local tack shop since they have about 50 or so dressage saddles that you can take out on trial. I ended up choosing a Kieffer Wein 16.5" with a medium tree and a Thornhill Danube 17" with a wide tree. I thought that the Kieffer would be too narrow and the Thornhill would be too long for her back.

I tried both on her without a saddle pad and, while they both fit, the Thornhill looked like it had been custom made for her. Then it was time for me to try it out since a rider can change a lot. I was nervous that since I hadn't been on her back since December she would be a naughty pony but she was perfect! She remembered everything that we had done at out last ride and was stretching out her back and relaxing which told me that the saddle did still fit well. Even better I love it as well, its sooooo comfy!

I was originally hoping to spend less than either saddle was listed at and thought that if either did fit I would go online and try to find a good deal just like I did with my $450 Niedersuss but the Thornhill seriously fit so well and was in such great condition that I just drove straight back to the tack shop and bought it.

Since my last post about gaining strength and loosing weight I've lost another 10 pounds which means I've lost over 40 so far. I have a bit more to loose and definitely want to continue to improve my fitness level but it is amazing how much easier everything is now!

When I was trying saddles on Katai I found out that my 16.5" niedersuss that fit snugly now almost feels big to me. I can also really tell the difference in my core strength. Then there is the fact that I have removed nearly the weight of a bag of grain from my girls backs. I am now well under 20% of Katai's body weight which is an awesome feeling :)

I will continue to work out at the gym and I'm hoping to do a mud run or two this summer to help me continue to work toward my goal. Bronze medal here we come!
at February 23, 2013 No comments:

Winter in Northern WI sucks. Between the ice and snow I haven't had any time to work with Katai at all. Then last weekend after receiving my bonus check from work I decided it was time to find her a saddle that fit. That whole story will be my next post but saddle trials and the thought of her bucking brought back thoughts of my first horse so I found a picture.

This is Bucky. The 16.1 hand appendix that tried to kill me on a daily basis. It's no wonder I have a thing for ponies lol. Just getting him tacked up when I was that tiny meant lining him up with a hill so that I could reach his back to puuussshhhh that heavy western saddle up there. He was an incredible teacher in many ways though and I owe him a lot. I've written about him many times because many of my fears related to horses are his fault but I also wouldn't be nearly the rider I am today if I hadn't overcome everything he put me through. I think we all need at least one horse like that to teach us, to make us better riders and make us truly thankful for the horses that actually want to work within and be our friends :) 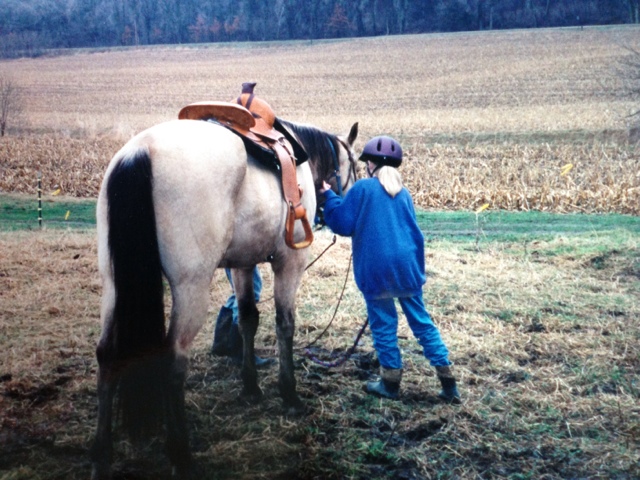 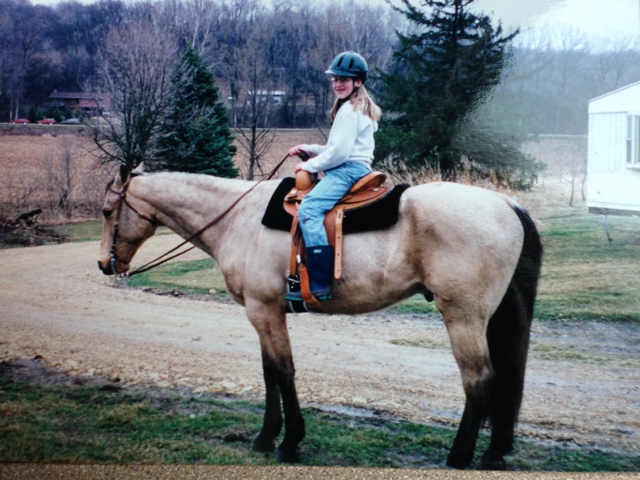