More of the Same

Today I worked more on some of the same stuff that I have been doing all week. For anyone that is familiar with CA's method today was more with with lunging for respect stage one and two. Stage two is fun for me because I can see Katai starting to build strength in the hind end which will be so important for her to be successful at dressage. I'm also starting to get FORWARD!!! When I got her everything was back or plant :P That of course was NOT going to work for any riding much less a dressage horse. Now I just have to point and she goes.

I didn't do carrot stretches today since I always have such a short time on my mornings off. Tomorrow I'm going to enjoy my day off by working on the girl's hooves and doing more carrot stretches. I'm also going to write more about me and my progress in gaining more fitness :) 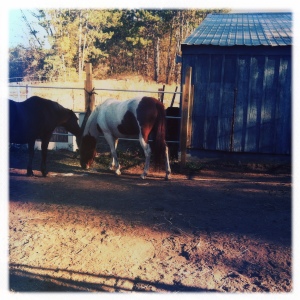 It's Katai's day off because Tuesday morning is my "lazy" day for housework. 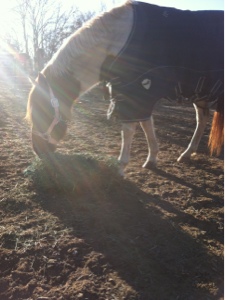 Today I started out teaching Katai the next step in CA's ground work lessons which is lunging for respect. As a way to achieve that I also yielded her hindquarters, backed her and did some desensitization.

The real goal today was to start doing some stretches with both her and Myshla. Myshla has a weak back and hindquarters, which you can see in the picture at the bottom of this post, and when she is stiffer she trots around with her head constantly tipped to the right. It was suggested to me by my trainer that I start doing some carrot stretches with her.

For Katai I think the issue is in her right shoulder. The first thing I noticed is that she had a grazing foot, or even a slight club foot on that side. Club feet are caused by three main things; genetics, injury, or stance. A grazing foot comes from a horse standing with one front foot back and one forward either from environmental causes, such as a foal spending too much time in a stall, or physical, such as stiffness or weakness. This causes them to grow more heel on the foot they keep further back to protect themselves. Injury, such as an injury to the shoulder or tendon can also cause them to grow more heel to protect themselves.

Many people try to correct a clubbed foot by treating the hoof when it would actually be more beneficial to treat the actual cause. With a genetically clubbed foot there is very little you can do, however in Katai's case I think the extra heel that she grows on that foot is more about a physical issue because she is extremely stiff through that shoulder. Since stretches are easy and free we'll start there first along with doing some work to help her maintain a shorter heel, I trim my own feet so this is also simple. Hopefully it will help but honestly it's a slight enough difference in angles that I'm not really too worried :) 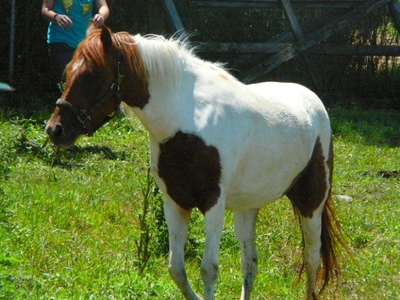 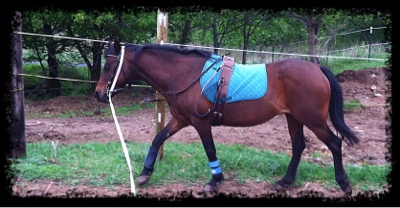 I had a great training session with Katai today and made a lot more progress.

I have to admit that I use some of Clinton Anderson's techniques to teach basic ground work. As a rule I don't like "methods" and I'm also not a huge fan of the current trend of "natural Horsemanship" trainers that sell anything they can for about ten times what it is worth. I don't have any of Clinton's products other than one book, I tie my own rope halters and I use a lunge line.

However, I did find that when I do ground work myself without following a book I tend to bounce around and skip stuff, part of the artsy brain type, and I'll manage to get everything done but it will take me twice as long. For that reason it is nice to have a nice list of steps to take.

Today I round penned Katai to each side with the western saddle on and got a couple of bucks out of her. They were sissy little bucks but it is the first time I had seen her do that at all so it was great for me to know. I also desensitized, which is the easy part for her, had her wear the bit for awhile and worked on backing away from pressure and yielding her hindquarters. She is getting so much better so quickly and it should be about 2-3 more weeks before I get on her depending on how much time I have to work with her and the weather.

The specific plan tomorrow is to work on more of the lunging type techniques, yielding her forequarters, and more backing and round penning.

I can't wait to spend more time with my girl! 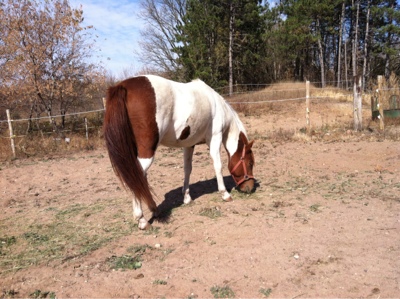 Well, Katai really is stubborn but the word katai means stubborn in Japanese.

It was actually a mistake of my mom who wanted me to name her after a character in one of her favorite series of books by Jim Butcher. I found out when I read the book that it was actually spelled kitai which means expectation and hope in Japanese lol! By that point she had been Katai for a few months and, to be honest, it sort of fits :-)

When I first went to pick her up I was unable to get her on the trailer after four hours and I have NEVER been completely unable to load a horse before. I went back by myself the next day and did get her on with some more work. However, after a relieved ride home when I unloaded her she proceeded to duck under every single fence on the property. They are all electric but they are also set for thoroughbreds and are high enough that she didn't have an issue going right under. After locking her in "pony prison" a tall pipe pen for a few weeks I was able to arrange to lower the electric tape in an area so that she and Myshla have more space to move around.

Katai also had some really bad habits. She had a way of getting loose from people by rearing up and back and twisting sideways. She also refused to pick up her feet and to move forward or away from me when asked. Luckily I have trained stubborn ponies in the past and now she is getting so much better :-) 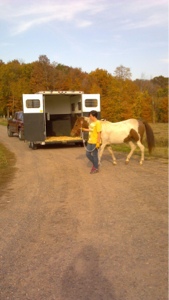 Email ThisBlogThis!Share to TwitterShare to FacebookShare to Pinterest
Labels: The day I wasn't able to get her home

If you have followed me here from my other blog, Little Sora Story, you know quite a bit about me and my journey with horses. If not I will briefly give you my background.

I got my first pony, named Prince, when I was seven but because my mom knew nothing about horses he terrorized both of us and was rarely ridden so she sold him after a couple of years. Then when I was nine my mom gave me riding lessons for my birthday :) They were group lessons and probably would have been considered hunter since we rode English and went over a few short jumps. After that I went a few years without horses and finally got my first at 12. He was a sixteen hand quarter horse and was incredibly naughty. He knew every trick in the book to remove people including backing up to a tree and rearing to crush his rider. I eventually had him riding nicely after I had enlisted a friend to help. He was traded for a large black Arab/Percheron gelding that was much sweeter and who I had for several years. We never really got along all that well though so once I finished college I sold him and bought Sora who you can learn more about in my other blog, little Sora Story.

Sora was gorgeous, wonderful and taught me so much but over the last year I started to realize how far I had come from my original riding goals and after I had been begged by the woman I bought her from to have her back I finally gave in.

So, now I have two gorgeous ponies! I have always been passionate about ponies and really always wanted something shorter. I like the ease of dealing with smaller horses, the smaller feed bill and the way it looks esthetically between rider and horse but most importantly I love riding ponies! The are so much like driving a little sports car, the handling is fun :) I hadn't previously pursued purchasing a pony because of too much peer pressure ;-) Finally though I gave up on trying to make others happy and bought Myshla in April of this year.

Myshla and I did a show and a clinic this year and it was the most incredible feeling being able to take MY pony to a show and have her behave and do well! We placed 5th in a large class at intro level with a score of 78! It was the first Dressage show for both of us since Myshla had just done trails before that and I had never had a trailer.

Things were so wonderful and fun with Meesh that when Sora was gone and I was still feeling a huge hole I found Katai for sale and traded couldn't say no. I learned to jump on a small, 13.2, paint pony named Flash. I ADORED him and would have done anything to make him mine but he was listed for sale at 18,000 which was WAYYYYYYYYYY too much for a teenager! Ever since Flash I have coveted small paint ponies and had looked for one off and on. Katai was too much to pass up especially since her previous owner was willing to let me trade tack for her :)

Myshla will take part in this blog but it is really mainly about Katai. Due to some hard riding and conformational issues Meesh won't ever be comfortable with tough dressage work and she is such a saint for a pony that I feel she has earned a nice peaceful life. She will be lightly ridden and possibly shown a couple of times this coming summer but nothing too tough.

Katai on the other hand is going to help me achieve my goals :)

I have always been extremely realistic about everything. I hate setting tough goals because I don't want to fail but this time I'm going to shoot for the moon and try my heart out to get there. Therefore I am going to share with you all that my goal is to get my bronze medal on Katai. I will always consider her health and happiness first and even if I'm able to get a couple of my scores on her I will be happy. However, I truly believe, and have been told by my coach and friends, that she has it in her to get at least to that level.

In future posts I will do more to journal where Katai and Myshla are in their training but for now I think I've gone on long enough for now. 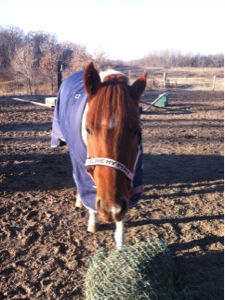 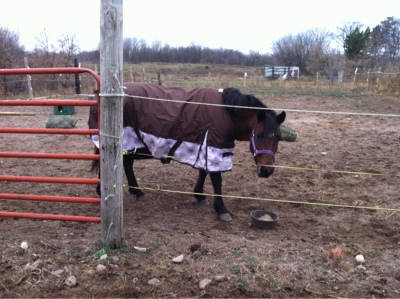