With just under a month until starting Niall under saddle can happen I'm getting a bunch of stuff checked off the list. I also haven't posted yet about what's in her feed bucket so I thought I'd update both of those things here.

Maintenance wise Niall got her teeth done this spring (April I think) and spring shots. Her teeth were, not surprisingly, quite bad so I'm glad we got that out of the way. I also had the vet pull her wolf teeth to make sure she was in good shape for working with the bit.

She's been wearing the Bemer blanket and cuff pretty much every day. I can tell she's less stiff when she's worn it. I know there is scientific research that shows that it can be helpful with healing tendons and ligaments so since I'm able to have access to it as an add on to my board I feel like it makes sense to take advantage of that.

She's also, of course, been getting her feet trimmed on a regular basis and her angles are slowly but surely improving. Ranging mustangs sometimes have better feet but Niall was in holding for almost two years so she's got a long toe, low heal, and thrushy feet with weak caudal structure. Of course stall rest isn't helping that much but at least she's not had to deal with spring mud. I'm looking forward to continuing to increase her movement to build up those structures. Overall she does have very nice feet, they just need regular care and continued good diet. Movement will be the biggest missing piece of the puzzle.

This month we had the farrier again on the 9th. Then on the 17th she's getting a massage. With the Bemer being a regular thing I likely won't get her massages as much as I did for Katai, however, before she goes undersaddle for the first time I'd like to have the bodywork person's hands on her to see where she might be tight. I can tell she's a bit restricted through her left shoulder and I suspect it's because of stall rest and/or compensating for her injured right hind so we'll see what the bodyworker thinks. Then, finally, she has a Chiro appointment on the 22nd with a new-to-me chiropractor. Same as the massage, I don't know that she's out anywhere but would like to make sure she's good to go before I swing my leg over for the first time.

This schedule should give her time to work through any stiffness following the appointments and potentially if anything is super off I can have her seen 1-2 more times before I proceed with any under saddle work.

For diet I've been slowly adjusting my plan and I think I'm pretty happy with her current diet. I started by trying to put her on what Katai had been on which was;

At first Niall would only eat pellets so I switched things up a bit and then re-subscribed to FeedXL and started listening to the Feed Room Chemist podcast.

After some iteration Niall is currently getting the following;

I also put her through the Stride Animal Health hind gut program which wrapped up in May. She'll be switching to a less intensive joint supplement, that also doesn't test, around the 12 month mark but she's been doing super well on the SP rehab so I don't want to change that up yet.

By far the thing that's made me most emotional about her recovery was seeing her co-groom with her neighbors With just under a month u... 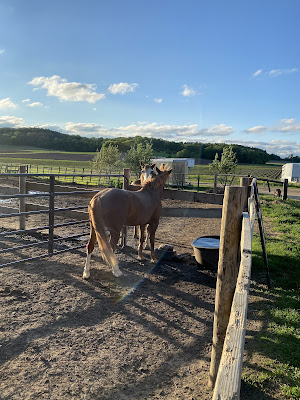