I was going to blog about my lesson yesterday but honestly it's pretty boring to blog about. K, my fellow boarder's, horse was having a bad day so she was riding Jane's baby horse that evening which meant that we had a slightly different lesson than is typical. I was actually appreciative since my brain felt like mush and the relatively easy (mental) work was good for both of us. Especially since we just did a LOT of bending and stretching which was really good for Katai after two weeks off.

Anyway, on to the blog hop.


T asks: Have you at some point moved on to a different horse, trainer, stable, etc with the purpose of advancing your progress? What made you realize the time was right for a change? Or did you opt to adjust your goals in order to stay with what you know is working? How did either choice work out in the long run?

For me the short answer is yes, I've sort of done both. The last time I really needed to make this decision with a horse was with Loki. 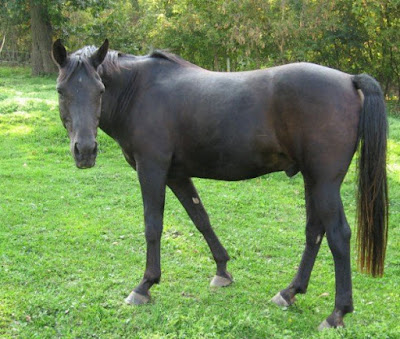 Loki was pretty much the perfect horse. He was a 15.2 hand percheron/arab cross gelding that was probably around 5-6 when I got him and around 14-15 when I eventually sold him. However, for pretty much that entire time we disliked each other. He was a good boy and I tried to make him happy and was really sweet to him but we just never were a good match.

Eventually I ended up selling him to a beginning rider who he was perfect for. I wished that I'd made the decision sooner and now I feel very strongly about having a horse that I really love and connect with as my primary mount. This was based on just never really connecting with him though and not on whether or not I could continue to make progress with him as he was certainly talented enough for me to have made progress on at the time.

I've also made the decision to change programs (a couple of times). I'd say that the majority of the first couple years with this blog were trying to decide if Katai was the right horse for me or if changing trainers/programs was what I needed to do. Of course you all know where I've ended up now.


In this case, with Katai, it was the program (and having one that put the focus on me) that made the difference. J and L were honestly both top notch trainers. J has her gold medal and is a USDF certified instructor with some very successful students. Just because I don't like her methods doesn't mean that she doesn't get results.

L is also a great instructor and gave Katai and I a great base to work with as well as taking Katai from pretty much unridable to just unreliable. However, I didn't actually start having fun and making progress until I found Jane who, arguably, is the least well known instructor that I've ridden with.

I'm also a HUGE proponent of owning a horse that you really enjoy because we just spend way too much time and money in this sport for that to not be the case. However, I never really struggled to connect with Katai it was just that she seemed like such a work in progress that I couldn't really see the light at the end of the tunnel.

I would say that these moves and or change in horses were never made specifically so that I could make progress up the levels but were more so that I could have more fun or connect to the horse I was riding. Early on with Katai I also let my doubt nearly get the best of me a few times (it didn't help that J flat out told me that Katai wouldn't ever be worth anything) and really had myself convinced that Katai was going to fail at dressage. However, with some more patience, more work on my position, more consistent riding schedule, more strength for Katai, and a different mindset now that's no longer a concern for me. Of course this is helped by the fact that I don't have lofty competitive goals and don't participate in a sport where a certain level of athleticism is required just to participate at the beginning levels.

I guess I'm not advocating that anyone keep a horse that they aren't enjoying or that isn't meeting their goals. Just sharing that sometimes that journey can take a little longer or be a little bumpier than others.