Ever since the CT I've had scheduling an Ultrasound on my to-do list but we needed the weather to warm up and since even if we were able to confirm Collateral Ligament damage we were already stall resting and following the right treatment plan for that I wasn't in a hurry. I did want answers though so as soon as the weather was more consistently in the 20s and 30s I got it scheduled.

Incidentally the appointment ended up exactly four months out from when she was originally injured. Since the initial recommendation was 4-6 months I was curious what the recommendation would be for turnout/stall rest as well as curious about potential ligament damage. Based on the fact that that hock joint is still fairly swollen I expected we would find some ligament damage but had my fingers crossed that I would get some good news.

When the vet got there he asked if we were doing more x-rays or just an ultrasound. I said that I would do whatever he recommended and our initial thoughts were that it likely wasn't needed. Then the scary/exciting part we decided to try trotting her to see how she was looking. We went into the arena and I jogged her away from the vet. She only took a few trot steps because I think she was so surprised that I wanted her to go faster than a walk but when I turned around to look at the vet and he said "well she's sound" I was so so relieved and happy.

At that point he mentioned that he would actually like to get x-rays to make sure that the bone had healed/was healing appropriately to rule out a cyst. I didn't ask specifically but I'm guessing the decision was mainly made based on the amount of swelling still present.

We started with x-rays and again, Niall was perfect. She's a practiced patient at this point and stood nice and still. The good news is that we still couldn't see any issues with the Talus on the x-rays and the vet didn't have any concerns about a cyst. The bad news and the biggest gut punch of the appointment was that she has the start of arthritis and not just in the lower joints but in the upper. Again, we knew this was a possibility and with the inflammation still present I would have been shocked if we didn't have some arthritis at some point but it still really sucked to see it on the x-rays.

Then we moved on to the ultrasound. I knew we'd need to clip her again but wasn't sure if they'd need to sedate her or not. I had previously clipped her more to make sure she wasn't going to freak out and to get her used to it with me than to actually get the hair clipped since I don't have any blades close enough for an ultrasound. It had been a few months since I clipped her and this time the vet pulled out the clippers so I crossed my fingers and she was actually super good. She also stood still enough for the ultrasound that we didn't need to sedate. I'm honestly not sure how I got so lucky with her amazing brain.

The only part she really didn't like was when he cleaned her hock and then put the jelly on but I think that was partially because it was just really cold. She even stood still while grain buckets were being carried past since it was during evening barn chore time. She deserves all the cookies, seriously.

The vet started by ultra sounding the non-injured side of her hock joint just to make sure. It also gave me a chance to see what a ligament looked like on an ultrasound that was in good shape. Then he moved to the inside of the joint where the trauma occurred and he described her ligament as "gnarly". To me it looked like hamburger. We were also able to see 2-3 small bone chips on the ultrasound. At this point he doesn't feel that arthroscopic surgery is needed but we'll continue to assess as she heals.

Based on everything we saw the vet wants her on the full 6 months of stall rest with as much hand walking as we can do. He also wants her back in "full work" before she gets turned out at all. We talked a bit about what that might look like since she isn't started under saddle yet and likely it will be careful lunging on as large of circle as I can manage. I'm also putting the pieces together for long lining as I'm hoping that might be a slightly more controlled way to introduce more movement especially since she was still figuring out lunging when this happened.

The prognosis from the vet is that she will still likely be able to do what I want to do with her which is trail riding and lower level dressage. Anything beyond that is a question mark as is how long she will be sound.

As mentioned, the biggest gut punch was the arthritis and the ugliness of the collateral ligament was yucky too. I actually ended up walking away from the appointment feeling pretty good. It was good to have answers on why there was still inflammation. It was also such a big relief that she trotted sound even if for only a few steps. As the vet said, she has three things going for her, her temperament, her size, and her age. It also felt so good to be talking about getting her in full work and for him to still feel that she can do what I want to do with her.

After the appointment I've definitely been spinning more on the arthritis diagnosis. I love this horse so much and she's so perfect that it really really hurts that she's got a diagnosis of something that is progressive like that and could so radically limit her soundness and/or life span.

For now we're just walking as much as possible, having fun together (as much as you can while walking in a circle for hours), and continuing training as appropriate so that we're that much closer to being able to get her started under saddle.

Such a cutie and thank goodness for the Bemer! Ever since the CT I've had scheduling an Ultrasound on my to-do list but we needed the we... 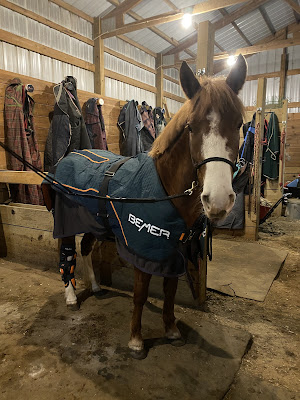