Those of you who follow me on Instagram probably already know why I was wearing riding boots at the airport in my last post. For anyone who doesn't, I was visiting Jen from CobJockey! 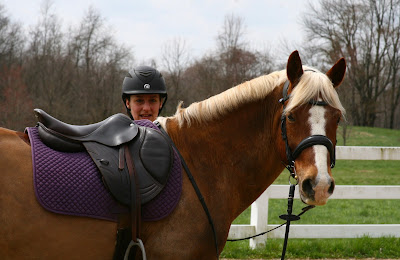 Jen and I first met in person at the National Dressage Pony Cup a couple of years ago. I really felt like I clicked with her and we had a great time hanging out. We started making plans then to get together so that I could see Connor again, maybe have the chance to ride him :), meet her spouse, and visit her amazing house. Since then we've talked about it but finding a time that worked for both of us with our busy work schedules and horsey stuff was tough.

Finally, over this winter we started talking about doing something this spring. I was aiming for April/May timeframe to hopefully have decent weather but not intrude into show season too much. In the end my bf ended up picking the weekend that we were hosting the Final Four so that we could escape the craziness.


It worked out great! The weather in IN was gorgeous and sunny in the 60s and 70s which was a nice break from our 40s-50s and grey skies. We left MN on Friday afternoon and got back Tuesday afternoon and we had so much fun!!


Before I get to the pony things I just have to say that Jen and her spouse were amazing hosts. Their home is gorgeous and it was great to be able to explore their hometown and visit some of the awesome places including a really adorable coffee shop that I wanted to take home with me. Also, my one worry about the trip was whether my bf would enjoy himself since he is not much of an outdoor person and definitely doesn't like to spend time at the barn. That meant that he and Jen's spouse would likely be hanging out a lot. I hoped that they would enjoy each other's company and that's exactly what happened. My bf has already been talking about when we can visit again and that he wishes that we lived closer :) 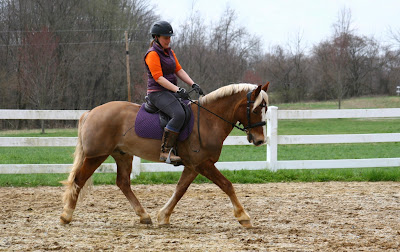 On to pony things! We had three full days at Jen's gorgeous barn and we took full advantage of our time. On Saturday we went to the barn early in the day and got to hang out and talk ponies for awhile while Jen's trainer and her husband got packed up and headed out to a clinic. Then we got Connor ready and headed to the outdoor where Jen rode first and then handed him off to me and, guys, he was SO MUCH FUN! The cues I know and use seemed to mostly transfer and the few things that didn't, and let's be honest I'm probably doing wrong, were fun to play around with to see where our understanding varied. 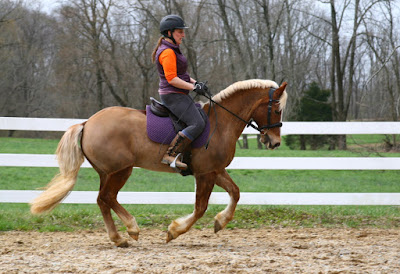 After we rode we gave Connor a bath and tried a new product on his mane, tail, and feather.


The next day was forecast to be rainy so we planned to ride in the indoor. It was icky enough out that the horses were inside, avoiding a fairly cold downpour when we got there. Like the previous day Jen rode first and then let me climb on again. I feel so lucky to have had a couple of chances to ride her amazing pony. I was able to build on what I had figured out the previous day and it felt like we were speaking the same language on more things. I was also playing with the half halts that K's trainer wants me to do with Katai. It was so nice to be able to play with that on a more educated horse vs. trying to figure them out as Katai was figuring them out.

Unfortunately I realized when I looked at these photos that I'd completely forgotten to close up my helmet strap. Oops! Quite bad on my part but luckily Connor was a good boy. 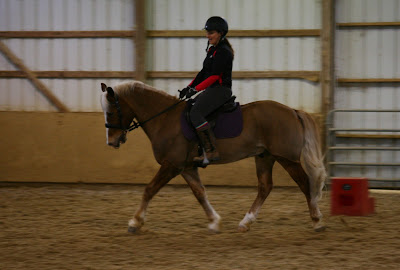 Since Jen has a show next weekend and a lesson on Tuesday we knew that Monday would need to be a quiet day. We talked about a few options but ended up going to a tack shop and then Jen giving me a lesson and some practice braiding Connor! The tack shop was awesome and I was sorely tempted by some of the clothes and brushes but I stuck to my budget and didn't get anything. Sad day for tack haul photos. With the braiding I definitely picked up some things including that braiding up is really truly important and quick braid is definitely nicer to work with than the gel that I've been using. 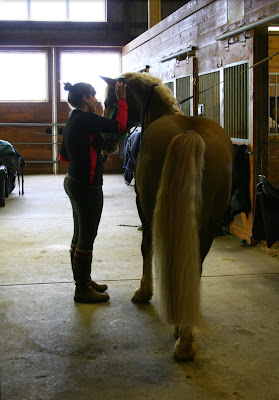 It was an amazing trip! I had so much fun with Jen and her spouse and Connor was just as amazing as I remember. My bf and I definitely want to visit again and would love to host here as well although maybe not during blizzard season. 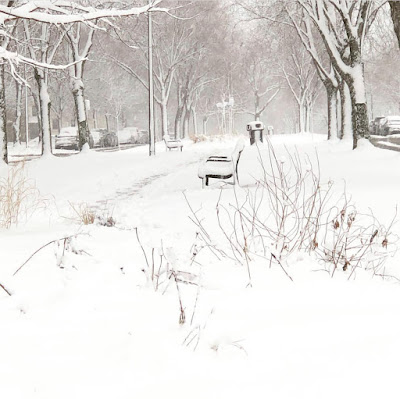