I've had a couple of not so good rides this week on Tuesday and Wednesday. Don't get me wrong, compared to where we were about a month ago we were still ahead but she was beng resistant again and our biggest improvement lately is that she'd mostly given that up. For that past couple of weeks she has consistently been more reasonable and when she has resisted it's been for individual movements rather than a whole ride and once we've moved past that moment she doesn't bring it up again. She been a really grown up pony and that lack of resistance has meant that I've actually been able to get things accomplished since I don't lose whole rides to pony-tude.

That's why going backwards a bit in just that one area this week has been depressing. I got through the ride on Tuesday, hoped it was the weather or that she was cycling but then after a repeat ride on Wednesday I realized that that was not the case.
So on the half hour drive home on Wednesday I analyzed what I thought was going on and came up with three things.
1. I was riding too much with my hands.
I think it's always going to be my natural instinct to go to our hands to fix a problem and I used to only ride with my hands. I've gotten so much better at riding back to front but I failed at that both days that things went wrong. L has me working more on consistent contact so since I'm concentrating there suddenly it seems like that can fix everything.
2. I was going into my meditative mode and tiping forward like a rag doll and thus throwing off pony's balance and causing her to rush around on the forehand.
When I start concentrating I stare at a point that gets lower and lower and slowly topple forward led by my head. Sometimes I think that if I weren't pulled out of that meditative state I'd probably just fold completely over and eventually end up like this. 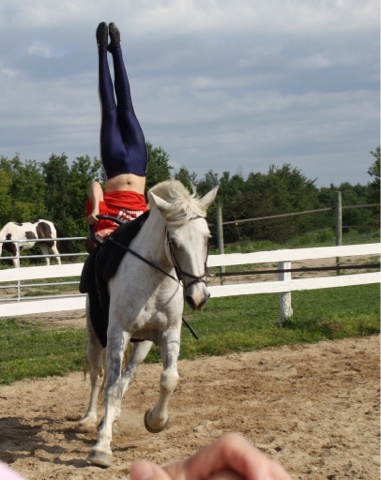 Failing hard at the dressagez

3. That whole relationship thing.
I'm just not an especially soft, sweet, cuddly person and, while I did have my Black Stallion moments when I was growing up, I'm an eventer born and raised. Pony crosses me and she knows about it and that's why she's become such a good citizen. Every once in awhile though I feel like she's concerned that some Pony Council is going to kick her out of the Pony Club unless she pulls some proper pony attitude. Her go tos are little things, since she knows I won't stand for big stuff, and are usually things like trying to turn around in the cross ties for no reason, refusing to go to one end of the arena for a few minutes, or (what she knows really gets my blood boiling) trying to climb on the mounting block.

She started this behavior about a year ago when she was young enough to not know better and I dealt with it then and thought that I'd defeated it. It's surfaced intermittently ever since just like the trash monster in Star Wars. 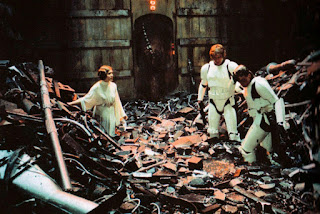 She's never gotten away with it, I've never thrown my hands in the air and not ridden, in fact all she's ever gotten out of it is a lot of lateral work and then a normal ride. Therefore, since she's smart, I've come up with the pony council theory.
On Tuesday she decided to pull this stunt. She lines up to the mounting block, I climb up, and then she slowly walks perfectly sideways over it which puts it under her belly which then pushes me off - or knocks me off. Or she puts her foot on the first step when I walk her over to it and tries to smush the mounting block or maybe her goal is this maneuver. 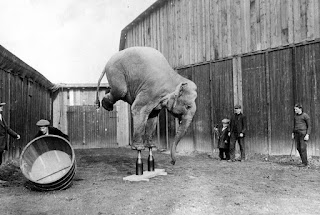 At any rate she gets lots of sideways work with her shoulders and lots of gentle and progressively firmer lateral work until she gets the point that putting her shoulders into me is a no go. Then we go back to that mounting thing and it normally works.

We repeated the same situation on Wednesday.

Tonight she started getting tense and tight through the jaw (her stubborn pony face) on the way to the mounting block but I had already decided that I wasn't going to handle it the same way I did on Tuesday and Wednesday. Instead I stopped her before we ever got there and, very much like a girl in one of those bad horse movies that we all loved (who am I kidding, I still love them), I put my hand on her neck and talked to her. Told her that we were going to get along tonight, "lets work as a team", etc. (can you tell I work in HR?) and petted her and cooed to her until I saw her relax. Then I led her to the mounting block and she stood stock still for me to mount while staying relaxed.

Then, thanks to me also making improvements in the other areas, we had a really wonderful ride. She was right back to being sweet and not overreacting to things. She was forward but not fast and listening to both my legs and the contact. She wasn't trying to pull the reins out of my hands but also wasn't ducking. It was actually pretty magical and I hope that we have a similar ride tomorrow morning :-)