Maybe not on the blogging front but in other areas yes, it's been a great start to 2020. We're in the middle of our first real snow storm of the year so I finally have some enforced down time to put a blot post together!

First, we're mainly moved in on the first floor of our house. The basement needs some serious work (except my tack corner but more on that later) and the upstairs is livable but still a work in progress. We did get our Roomba set up today though so we have that going for us.


And then there's my tackroom corner in the basement. 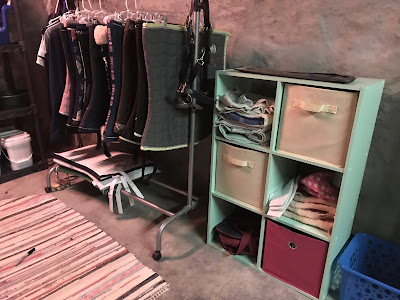 I so love having this much organized space for my horse stuff. It also feel slightly insane that I have this much tack in "storage" which completely ignores all the stuff I have at the barn and in my car both of which are more actively in use. This set up is also awesome because it's right next to our washer and dryer and the laundry tub which make tack cleaning easy as well as doing horse laundry.

One big thing that's going to be updated is that the tack locker that I made with my dad is getting moved in probably within the next month or so. It's going to need a coat of paint and some finishing touches but then I'll be rearranging to make use of that space. I'd love to have it at the barn but the last couple of barns that I've been at already have dedicated tack space and didn't allow outside tack lockers so my best option is to have it at home. I'll share updated pictures once I have that set up.

In pony news things are going really well. I've been really focused on utilizing the skills that I'm learning from resources such as the Jane Pike podcasts and it's making a huge difference with how Katai and I work together. We're in sort of a back to the basics and strength building place right now. It could, and would, have felt frustrating but I've been really focused on how much of a different place we're in relationship and communication wise so really it just feels like a huge step in the right direction.

I've also been so happy to have Katai in a stall again. A week or so ago we had a quick temp drop and I went out in the morning planning to add a blanket and I was feeling bad that she was probably cold. I got to the barn and saw that the barn employee had added a couple of extra layers when she turned out and Katai was toasty warm. I actually got teary eyed. I can also tell that she's getting her magnesium every day and it seems to be making a huge different in her ability to learn and process the work we're doing.

Katai was having a bit of trouble adjusting to the new stall board set up. For whatever reason all of the mares in the pasture she was in previously got along SUPER well and were very close. After moving her to the stall, she was worried and upset for about two weeks and spent a lot of her time trying to convince us that we'd screwed up and put her in the wrong place. I started her on a hemp supplement just to see what happened since I was curious if it would help her high anxiety around the change. She hasn't been on it for long at this point but I'm curious to see if it helps her anxiety in general. She seems to be adjusting better to the stall at this point but I'm not sure that it's related to the new supplement and feel that it's more likely it's related to time.


She's also scheduled for a massage on Monday to help offset any muscle soreness with getting back into work. I'm curious if she's more or less receptive to the new massage guy this time since she was pretty doubtful last time.

I'm hoping that since moving is quieting down at this point I'll be able to blog more frequently since it feels like I actually have content now that I'm back in a more regular routine!
at January 18, 2020