These have stopped being exciting adventures at this point and are more like slightly annoying necessities lol. With that being said, I have been trying have the mindset of using this move to continue to prep for trailering to shows or as traveling practice in general. I actually talked about it with my therapist and she gave me some homework as far as keeping my anxiety low. She also reminded me that something that’s super scary for both of us like trailering is not the place to focus on others and instead to ask for what we need and focus on our relationship. While my therapist isn’t a horse person it was EXACTLY what I needed to hear and continues right along with the theme of really focusing on the relationship and trust that Katai and I have built.


A lot of the anxiety with moving Katai comes from knowing that she’s not always a great loader and then feeling embarrassed and guilty that she isn’t better. In all honesty I work hard on it and try to utilize resources (such as others offering to let me practice loading her) whenever I can. This summer alone I practiced in two different trailers, one a few different days, and we made some progress. I also really hate feeling judged. As I told my therapist horse people can be extra judgy and part of why I moved was that the people at my previous barn were super extra special judgy which definitely increase my anxiety about everything including getting her loaded.


That morning I actually was managing to keep my anxiety low on the drive to the barn. I was working through some of the homework I had from my therapist specifically for pony moving. When I got to the barn though I saw that two of the judgiest people (and most forceful handlers) were there and got scared. One of the two (miss nosy) was the person who was bullying me when I first moved in. We have an understanding but I still don’t trust her to help or handle my pony at all and knew that she’d try to insert herself in getting Katai loaded. She had also seen me doing trailer practice with Katai on a day when I’d neglected to use a lunge line and, because of that, Katai got free and spooked her horse. I felt super bad about it but horses will be horses and humans will be humans and it was extra unfortunate since that literally hasn’t happened since I first got my pony and of course that was the horse that she spooked *headdesk*. I apologized to her that day but she didn’t handle it very well.


Anyway, on Sunday I was at the barn early so I picked up the last few things. After a while the new barn owner, who we’ll call M, showed up with the trailer and I was relieved to see that it was fully open in the back and had a ramp since I knew that both things would help Katai load quickly. I ignored miss nosy inserting herself into the conversation and walked up to M and let her know how she could help which was basically to stand off to the side, wait for me to walk Katai in, and then hold the doors shut so that I could fasten her up. M looked doubtful and my stomach churned but she heard me. I went and got Katai and led her back to the trailer and could tell that as I walked up miss nosy had been telling M what an awful loader Katai was. I marched right up into the trailer, Katai followed, pulled back once, and then walked right on and turned around. She proceeded to stand fairly quietly next to me while M pushed the doors shut. I tied her up, fastened the slant, and then walked out of the trailer. The whole thing took less than 3 minutes and miss nosy was nowhere to be seen when I walked out of the trailer.


M locked up the trailer, I hopped in my car and we had an uneventful trip to the barn. Very nicely M asked me if I needed anything when I went to unload her. We basically reversed the process, Katai unloaded nicely, and then we walked her to the pasture and let her go to start introducing herself. The whole thing including drive time took no more than 35 minutes and was another good experience to include in the growing list of positive travel experiences.


I like M so far. She hung out watching the herd go through the initial integration for about 15 minutes even though it was raining. We chatted but also she was keeping a careful eye on everything and was ready to break up any fights that occurred if needed. There were definitely a few scuffles which I was surprised to see. Katai has definitely matured and seems to have decided that she needs to be top mare which is so weird since I’m used to her being bottom of the pack. We eventually decided that they were quiet enough and she gave me a tour and I got to know M and the rules a little more. I like her combination of no nonsense but also no superfluous rules and can tell that it’s all about trust which I like since I know my stuff and hate being micromanaged (looking at you previous barn). I got my stuff unloaded into a beautiful and luxurious feeling open sort of tack locker/compartment in the room for the pasture boarders. I really like the setup! I’m looking forward to eventually moving Katai into a stall but I’m certainly going to be spoiled even with pasture board. The barn is set up really nice and feels cozy and like home again which is so super nice. 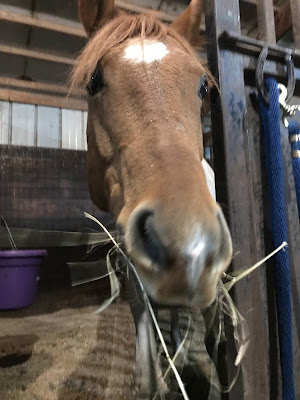 I’m planning to go out tonight and do my first lunge or ride with Katai even though it’s a Monday. Worst case scenario we’ll just do ground work and get her used to the new facility, best case scenario we’ll do a nice ride in the indoor. I’d like to do groundwork outside but it’s supposed to be raining out and it’s only in the 50s-60s this week so I’d rather not get that cold and wet. I can’t believe it’s almost blanket season again!