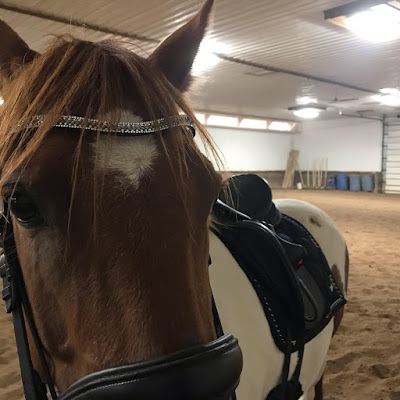 Yikes, I was doing better with posting for a while and now it’s been almost a month again. There’s a reason for that but I’m not happy about it. Basically ever since we’ve moved Katai has had random stuff going on. None of it seems to really be related, none of it seems to point to needing the vet, and none of it is easily addressed. Mostly I think she’s, as I’ve mentioned before, a very sensitive flower that’s dealing with a lot of change at the same time and I feel really awful and guilty about that but at this point it is what it is. Everything from a few massive heat cycles, being tired out, muscle stiffness, sore feet, an ulcer flare, not getting enough magnesium so being a hellion, etc. Below is a timeline if you want to read a bunch of boring stuff about pony’s slight offness.

-The week after I got back from the cabin I was only able to get myself to go out and give her supplements a few times throughout the rest of the week. Then the Saturday after (10/5) she was on fire! She felt great and we had a great, if slightly short, ride. I was happy and feeling like she was adjusting finally after being pretty tired and muscle sore for the 3 weeks or so after she moved.

-The following week on Tuesday I lunged her in the Vienna reins and she was good but sluggish which is very unlike her. This has been the theme since she’s been on pasture board and I suspect she’s just using a lot of energy in running around when she would have been in a stall before. She’s definitely building muscle and I love that but it’s also tough waiting for her to adjust and get used to having all that additional time to use up energy.

-Wednesday and Thursday that week I did a couple of light rides and had a couple of fellow boarders watch because she was short in her stride but not off and still lethargic. Both fellow boarders agreed that she wasn’t off (evenly short) and basically seemed to think I was making a mountain out of a mole hill. Since I know I’m a bit of a pony hypochondriac I felt better and decided to give her the weekend off.

- On Monday I was going to go out but I got stuck at work really late so she ended up with 3 days off. Then on Tuesday she was lethargic again but I did more of a ride and worked really hard on trying to loosen up muscles to see if it’s just that she was really tight. She did actually make progress! I got lots of snorts and sighs and by the end she had a more normal stride length for how she’s been going recently. She also just felt much looser and more forward. I was really encouraged!

- Wednesday I went out and had a plan to do similar work but when I touched her girth to tighten it (didn’t even get the buckle undone to tighten) she had a massive girthy, pain response. I tried the other side and got a similar response. She’s not a girthy pony, and hadn’t had a girthy response the day before, so it was pretty clear she was having a bad ulcer response suddenly. Strangely(?) enough most of the horses at the barn seem to be having an ulcer issue right now. I’m not sure if it’s just the weather change, or the change from grass to just hay, or something about the hay but it seems to be the norm. That makes me feel a bit better but I also hate seeing her uncomfortable. 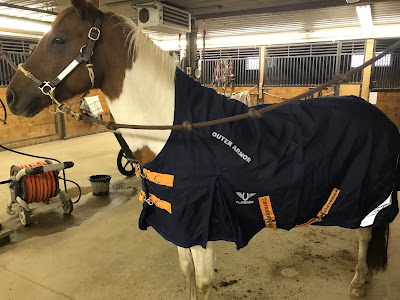 -The rest of the week I’ve been out basically treating her for ulcers, putting thrush meds in her feet, and doing blanket changes as needed. S he’s still been tight and lethargic so I’m still not sure what’s going on there but again, no one other than me seems to even notice so maybe I’m just worried about nothing.

Grrr, I really wish they could tell us what’s going on. She’s also either been sore muscle wise or had sore feet off and on. The high anxiety, panicky part of me is worried that she’s having a laminitis flair because of the tiny amount of grass she can get but she hasn’t had an increased pulse or heat in her feet. It has been SUPER rainy though so I suspect she’s just got tender footsies from standing in the muck and rain 24/7. Hopefully she’s not brewing an abscess.

I’m getting out there about 4-6 days a week right now to make sure she’s getting supplements, meds, etc. which is tough because as this is happening I’m also dealing with some bad depression. You know what could help that? Having a pony who feels happy, comfortable, and sound and being able to ride and get that form of exercise.

Honestly? I’m really, really, really, really tired of dealing with all of this. I feel like this sort of thing is made worse because of how sensitive she is and yet I wouldn’t ask for her to hide any of this. I just hate having this sort of domino, one thing after another, sort of situation that feels like it’s been going on low key since I was still boarding at Jane’s. Can’t the universe just give us a break and a month where things just smooth out, we can make some progress, and we’re both feeling ok?

I know it’s not fair for her, as another being who’s dealing with her own crap, but I just want this part of my life to be working well right now and to be my rock while I’m dealing with mental health stuff as the season changes.
at October 22, 2019