I hate moving Katai. It’s stressful needing to load her when I know she’s not always good and each time it’s a different trailer and a different person waiting on us. I also really hate changing up Katai’s routine and stressing her out. However, there have been good things about moving as much as we have. She’s very flexible with herds of horses (kind of like kids who move around a lot and get used to going to a lot of different schools haha) and I’ve made a whole bunch of amazing horse friends. 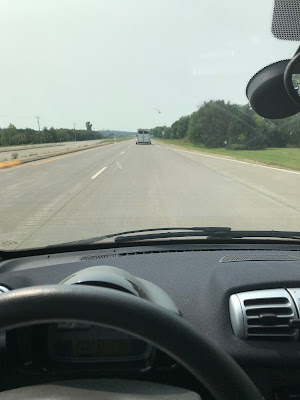 I was doing a good job of keeping my stress to a minimum until Saturday morning. Luckily my new trainer (K) was trailering and was planning to be there around 10:45 which gave me some breathing room in the morning to get everything packed, get coffee, and not need to wake up horribly early. I still got to the barn quite early just to make sure I had enough time and got her stall packed up, picked up her extra supplements, and then cleared out my tack locker. I wish I had taken a picture of everything in my SmartCar because it was kind of like a puzzle to get everything to fit well.

K and her mum showed up right on time and I went to collect Katai. I’d been saying my goodbyes but one of the barn workers wanted to say goodbye to Katai before she left so after I caught her I brought her over to say bye to him. The trailer was luckily a three horse slant which I knew would leave ample room. However, it was a step up which she hasn’t been in for a while now and it had a tack space in the back so the entrance was a little tight. All in all though she loaded really well in about 20 minutes. She did pull back several times but I’m getting much better at some of my loading techniques and just kept her facing the trailer the whole time and made her comfortable place right at the entrance and/or inside the trailer. K and her mom were extremely patient and just let me do my thing which I really appreciated!

Once Katai was loaded I realized I’d left her turnout halter up by the gate so I hopped in my car and drove up to the upper barn to get it while they started out with the trailer. The trip ended up being smooth but there was a TON of traffic and especially semi traffic on one of our main three lane highways. I followed a decent distance behind and was really glad it wasn’t a day where I was driving the trailer.

Once we arrived I pulled her out and we brought her over to quarantine which is a roundpen with a shelter. She hung out getting her land legs back and then rolled. She still stresses enough about trailering that she sweats a decent amount and it was also a hot day which didn’t help. I made sure she found the water and K tossed her some hay including some alfalfa which she immediately started scarfing down. At that point I dropped off some of the stuff they needed like her supplements, put her fly mask on, paid K for trailering and then headed out to let her destress. 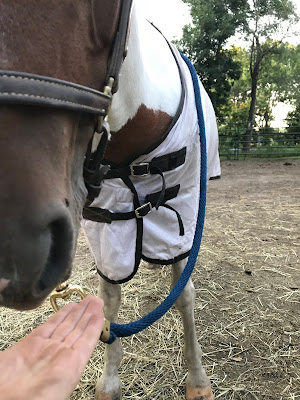 I headed home, grabbed some amazing vegan food from the Herbivorous Butcher and then spent the rest of my Saturday resting, re-organizing her stuff, and cleaning all of my tack which was sadly overdue for a cleaning. It will live at my apartment now until just before I move when I’ll move it into the new barn.

On Sunday I had planned to head out in the morning but I had a busy day planned already, so a small window to head out to the barn, and then woke up with a really sore and swollen finger which I quickly realized was infected. Bf and I headed to urgent care where I got instructions and some antibiotics and headed home. At that point it was too late to go to the barn so we did our other scheduled things and then I headed out to the barn around 4:00. 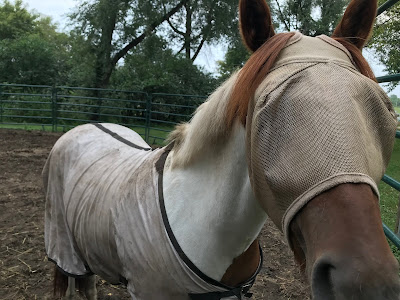 It was quickly apparent to me that I’d absolutely made the right decision in moving her closer. The drive felt easy and quick and I wasn’t already tired out by the time I got to the barn. Katai actually seemed pretty settled which I was really happy to see. She’d also been eating her grain foods and since they’re literally only vitamins they don’t taste amazing so sometimes if she’s stressed she won’t eat them. I groomed her really well and scratched all her itchy places. She was very happy to have me and sort of clingy so I spent quite a bit of time with her. Once she was all clean I put her fly mask back on, put her fly sheet on, fly lotion everywhere, and put her fly boots on so she was all armored up against the bugs. I left for a minute to put the stuff back in my car and when I walked back to say goodbye she gave me this sad little whinny that broke my heart. I’m so looking forward to having her so close and it will be great to use this quarantine time for bonding even if all I want right now is to ride my pony!
at August 29, 2018 1 comment: 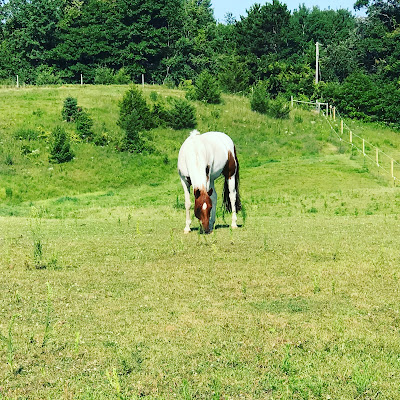 Well, after posting “all” of those posts there were even more life changes and a timeline that changed slightly so things have been really busy again away from the barn.

Katai is still doing well but I’ve been maybe seeing her 1-2 times per week at this point. As July was coming to a close I decided that for a few reasons, during the month of August I was going to just coast and only go to the barn if I felt like it and/or to make sure she has everything she needs. Luckily with full care board at an amazing facility that’s ok and while I still feel guilty about it I don’t feel as guilty as I thought I might. I think I really needed this “vacation” from riding. It’s been something I’ve put my whole heart into for the past 5 years or so without really significant breaks so this has been nice and refreshing.

Also, since Katai will be in quarantine for the second half of the month and I’ll be unable to ride or work her it seemed silly to try to get her back in shape for two weeks only to have her lose that conditioning while she’s standing around for two weeks. As of now Katai is at the new barn and in quarantine but that’s for a different post.

The life changes are really exciting however :) As I mentioned previously other things were in the works to help with the overwhelmed feeling. One was moving Katai closer, another that happened to come up was the work change/promotion that significantly reduced my stress, the third is that my bf and I were starting to talk about moving in.

Initially it was going to occur next spring to coincide with the end of the lease I signed but the more we talked about it the more we felt that actually moving before winter was ideally the way to go. We moved up our plans to look at apartments while keeping in the back of our mind that we may still need to wait until next spring. We looked at a couple of meh places and then we saw two that we really liked that checked all of the boxes. After some debate we ended up with a favorite and went ahead and signed the lease to start moving in September!!

My bf will have until the end of October to move and I’m working to finalize a sub leaser who will likely want to move in mid-September. Talk about stressful with moving myself and pony twice this year! However, both moves are going to significantly reduce my bf and my stress and open up a bunch of time that we haven’t had which is much needed. I’m also just so thrilled and excited to move in with this amazing person I love.


At any rate moving for me will likely occur during the first week of September right as Katai gets out of quarantine. To help I did take the full week off instead of just Labor day so hopefully that allows me time for both getting Katai back into work and for moving. I will post a brief update of the move to the barn and I’m hoping to do a mini barn tour this week. Otherwise the blog will likely be pretty quiet until all of the moving is completed. Hopefully at that point I’ll be refreshed and rested from pony stuff and ready to start this blog back up in ernest!
at August 20, 2018 4 comments: