If the Broom Fits

Well, I didn't end up dressing up for my Halloween lesson but if I had I would have totally dressed Katai as a witch...

She was just as bad, if not worse, for this ride with Jane as she has been for the rest of the week. I was SO GLAD that I had Jane there to help me and make sure that it wasn't just me. I knew that some of it was me but I also needed to know what to change and how since I had run out of tools.

Jane was able to be really helpful but even she commented on how horrible Katai was being. Honestly if I didn't know better I'd say that she'd run out of Magnesium because she's acting more like she used to when she wasn't getting that. I suppose it wouldn't be unheard of for something to be off with her supplements but I trust Smartpak so I really doubt it. Both Jane and I are thinking that it's the change in the weather combined with a bunch of new horses in the barn and a new routine.

I'm really hoping that it is just that and that she decides to return to normal sooner rather than later. I won't even go into much about tonight since it wasn't as though we really made any progress beyond ending with a slightly looser pony than we started with. Very telling was that she was really sweaty around her ears and on her neck despite the cold and the fact that she really didn't work that hard or for that long. I really think it was just where she was mentally tonight.

She's looking cute since she got a spa day yesterday but that's about all I have that's positive about where we are with our riding and dressage progress at this point haha. Along with the spa day I had a challenging (but better) ride yesterday only because I literally didn't ask for anything and just bombed around while my new fellow boarders rode around with us.

Just as I hoped it was great to have them there and is still motivating me to go to the barn despite current pony/human relations being so challenging :)

Also, more puppy pictures for your daily dose of cute!! 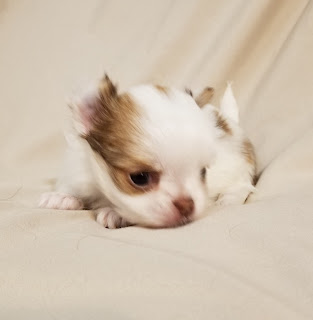 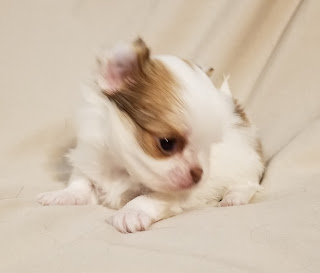 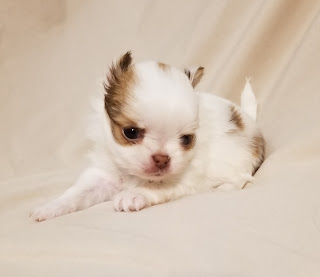 I can't believe that she'll be 5 weeks old this week! Only about a month left before she comes home :)