I give anyone who rides through the winter, or by that matter that extreme summer heat in those areas where that is the toughest time to be outside, a lot of credit. Whether your winters get down to 40 degrees or -40 degrees the extreme difference makes it difficult to want to be outside much less try to handle a horse that wants to bounce off the walls to stay warm. With that being said I do live in an area with extreme cold and after my ride tonight I thought it might be interesting to share some of what I do to make riding through the winter work for me. 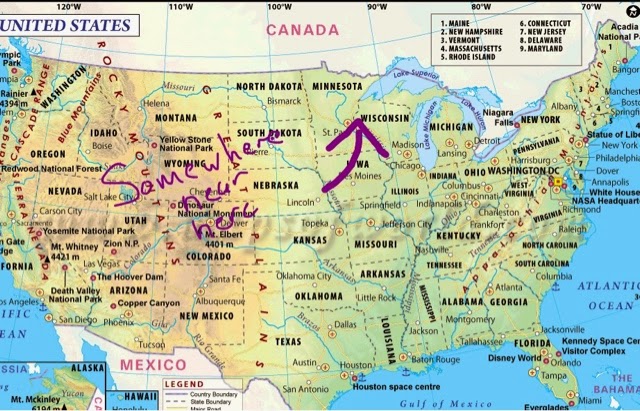 I live somewhere in the general vicinity of where the arrow is pointing above. Yes, it's pretty far north and yes it gets extremely cold. At the beginning of November I was really happy that we were still having 40 degree days but last week that changed. Last Monday I was dressing Katai up in her 100 gram blanket and wondering if that was too much but by the end of the week she was in her 300 gram and I was hoping that was enough. Tonight when I rode it was 7 degrees with a windchill below zero.
At the place I am boarding currently there are two extremes. The tacking/grooming area/viewing area (since it's all one room) which is kept at about 60 degrees and outside. The arena is not heated at all so other that being out of the wind it can be quite frigid. To keep Katai heathy and try to keep her from getting injured with the temperature change I bring her in, pull her blanket immediately and groom quickly. I use a quarter sheet and once I get her out to the arena I start getting her moving as quickly as possible.
To keep myself warm I layer. 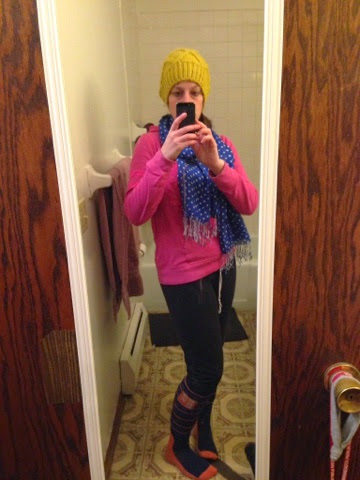 I'm wearing two shirts under the hoody. You can't tell from this picture but the breeches are these really thick polar fleece breeches that a friend gave me when she stopped riding and I'm wearing my Under Armor long underwear underneath. The Under Armor is 3/4 length so that it doesn't get too bulky with the socks. 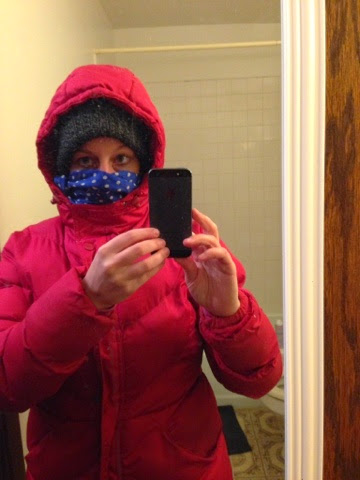 Don't I look awesome. This is, minus that heavy duty mittens, how I go get my horse. With the jacket I'm wearing four layers, five with the sports bra, on top and two - three on the bottom. I have winter riding boots but tend to do better with thinner socks that give me room to move my toes than if I wear too many sock layers. I pull off the hat, mittens, and sometimes even the jacket while I groom and then put the jacket back on along with riding gloves. My ears do ok while I ride as long as I keep moving and I can ride in summer riding gloves also as long as I keep moving. Then it's back to the warm grooming area as soon as possible and back off with some of the crazy bundled up layers.
All the clothing sucks but it does keep me warm and I always feel so much better after a ride even if I do dread going out in the cold.
Katai also gets bundled up and so far her layers are working. The sheet and 100 gram combo came off to be replaced by the 300 gram early last week after a snow and drop in temperatures so it was covered in icicles and after being consistently worn for a few weeks was ready to be washed. Both the sheet and liner got washed in the machine on cold and hung up to dry. The liner had a small rip in the top right near the tail where I'm sure one of Katai's new and bossier paddock mates got a little over zealous about getting her to mind. I patched it up since I'd rather keep up on these things rather than let them get to the point where they NEED to be patched. The sheet also had a small L shaped tear in the tail flap and other minor signs of war games. 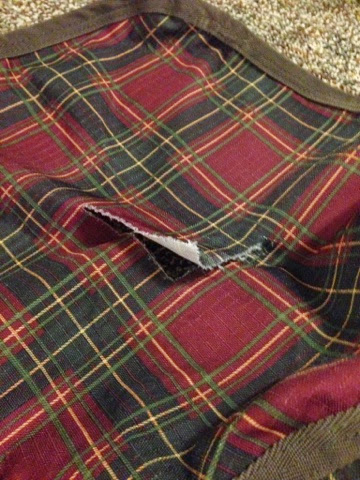 Mares...
I also brought all my leather tack home for a good cleaning and was admiring my new girth. 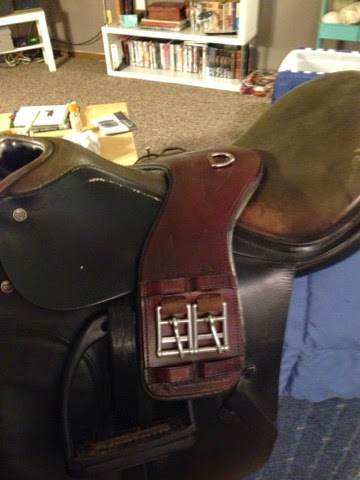 Isn't it gorgeous! I actually like that it doesn't match and with the extremely worn saddle seat it actually sort of fits in. H was slightly horrified that I didn't get black to match my saddle but I've never been that into matching things like that. I'd rather have things that complement each other and I think this color girth with this saddle looks incredible. I'm going to try to do a review of the girth and how it works but Katai is SOOO fuzzy that the girth just sort of dissapears so you won't really be able to see how it fits. I'll still see what I can do though because it is awesome and what a difference it is to not have her saddle pulled forward and, most importantly for my little monster, to finally have her elbows clear.
More to come on our amazing progress!
at November 17, 2014