I got to the barn early so that I could get everything packed in my car and spend some time with my pony before her world changed again. She was sleepy because it was so much warmer than it has been and she had been standing in the sun.

J, the barn owner, got there soon after and I got Katai out of the pasture after having to track down the property owner to unlock the gate. She oddly enough marched straight to the trailer and climbed halfway on before I had myself organized. Then she caught herself, heard the trailer making clanking noises and jumped back out. She was a little wound up then and it took another 20 minutes or so to get her on but she still did well and was listening and not getting too wound up. 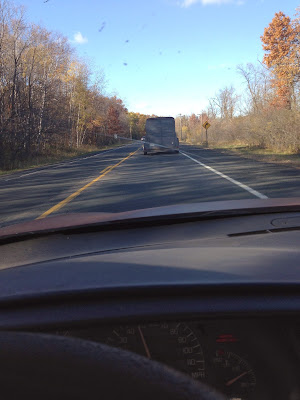 I followed the trailer back to the barn and she rode very well, not bouncing around at all, and J said that she couldn't even feel her back there. She was quite sweaty and stressed when we got there and I pulled her off and turned her out into the round pen to bounce around for a little and work off some of that stress. I stayed with her for awhile and then went to unload my tack and get settled in.

I realized as I was unloading and finding places for my tack that she has never been at a normal boarding barn before. In fact, the largest herd of horses that I think she has ever been in was with 3 others. She was calling and basically pretty wound up. It didn't take her too long to calm down considerably though and after a couple good rolls she was relaxed and walking instead of running. 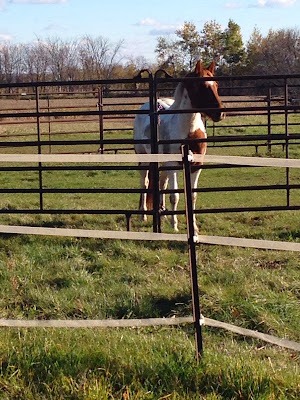 She was really a perfect lady despite all of the big changes and walked right over to her isolation pen nicely even past some scary things like tarp covered hay bales and a dog that is almost as large as she is. I walked her around the pasture to show her where the fence was and left her to call to the other horses and make friends.

Last night Gordan and I had been given free tickets to the Minnesota Roller Girls roller derby. It was my first time watching roller derby and it was awesome! The ending was extremely close and I almost lost my voice yelling for our friend's favorite team. 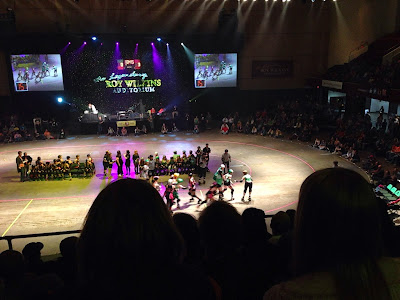 Then this morning I went to a Dressage Clinic with Amy Larson. A whole bunch of D's student's rode including Lisa and I was there mainly to help groom for Lisa and keep her nerves to a minimum. Everyone rode very well and I really enjoyed Amy's teaching style. D told me that there will be another clinic in March and I'm going to make it my goal to get Katai ready for that clinic. Amy concentrated a lot on getting things right at the walk including rider position and the getting horses moving well and using the correct muscles. She had people trot very little which was a big change compared to the other clinics I've been to where the clinician can't get the rider and horse into the trot fast enough. 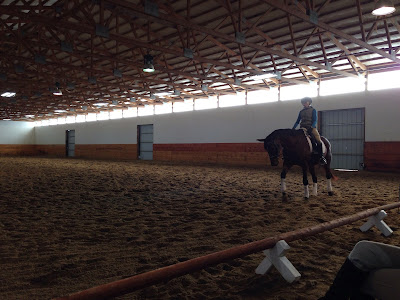 Unfortunately this is the only picture I took that turned out at all but this rider was the most advanced I saw and her horse was excellent. They were both very fun to watch!

This evening I went out to the barn to see how things were going and to start to acclimate Katai to the coverall arena. Another thing I had realized is that my little pony has never been in an indoor arena so I knew it would take a little getting used to.

When I got there I noticed that her halter and lead rope were missing and when I went out towards the pen I had left her in she wasn't there. I saw J in the distance and walked over to see what was going on. As I walked I was looking around and finally did see her out in a large pasture and guessed, correctly it turned out, that she had escaped her isolation pen. Mostly Katai isn't much of an escape artist but the huge change in her routine and all of the new horses had her pretty worked up. J told me where to find my halter and I went to catch her and check on her.

She actually walked right up to me, which is a huge change from how she used to react, and let me catch her easily. She also walked calmly with me back to the arena and even walked in pretty well. As we walked I noticed that she was pretty gouged up. I have no idea where she went or what she ran into but she has deep scrapes on both sides of her barrel up towards her back and a very deep nasty looking scratch right in her flank. I tied her and then went to get medicine to put on them and she lost it a bit. Luckily J has some of the Blocker Tie Rings and she just pulled back a ways and then stopped. I got her sorted out and got her lunging to work off some of the stress. She was obviously sore, tired and stressy and I'm sure the fact that she is in raging heat isn't helping her feel any better. Moving around a little wasn't going to hurt her at any rate and I walked around the whole arena lunging her close to all of the trail obstacles that had been set up. She didn't bat an eye at anything, not even the bridge covered in tarps. Once she started to drop her head and blow I tied her again, cleaned out her feet (which continue to look better and better) and got her all doctored up. She danced a little whenever I left her but was really a lady all things considered. By the time I had her all set she was getting herself a little worked up again so I got her out and moving again. More stress release and then she got her grain.

Finally, as it was getting dark, I put her rain sheet on since the weather is taking a turn for the worse again and put her back out in her pen. J had pulled in the herd that she is going to be a part of (and the herd she got loose to try to join) so they are right along her fence. Hopefully she will stay where she is supposed to and not be any worse for the wear tomorrow.